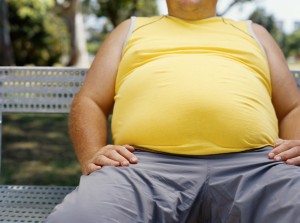 (Editor’s Note: This is not the author’s tummy.)

I’ve always battled with my weight. This last year has been especially tough as I’ve had to take a break from my other career (as a prolific goal scorer in adult recreational soccer leagues) due to nagging injuries that have turned into chronic injuries. I started playing almost 30 years ago and haven’t had any significant periods away from the game until now. The wear and tear has caught up with my knees and ankles.

When you’ve got chronic pain in your knees and ankles, getting regular aerobic exercise is a challenge. It hurts to walk, let alone to go for a jog or a run. Exercise for me has always been specific to the sport I’m playing. Take away the sport and I don’t get enough exercise. Take away the exercise and my clothes fit tighter than they should be.

I’ve been telling myself that I need to do something. Yeah, tomorrow I’ll do something. Of course, tomorrow soon turns into yesterday, then last week, then last month, and here I am still sitting in my recliner. So one night while I’m sitting there with my 5-year-old son, he turns to me and asks, “Dada, why is your tummy so big?”

As soon as the words left his lips, my wife chuckled and then got embarrassed for me. I initially had a similar reaction. Kids say the darndest things…often when you least expected or are prepared for them. During my pause to think about how to respond, I realized he’d asked an incredibly powerful question. For his purposes, I used it as a teaching moment and answered it with a simple statement about the importance of a healthy diet and exercise, and that I needed to get better at both.

The answer I gave him was good enough for him, but it wasn’t good enough for me. Like most Dads, I want to be a superhero in my son’s eyes. And, I don’t want my alter-ego to be “Flabby Man.” So his question got me off the recliner and moved me into action. I did some research on local gyms and will be signing up for one this week…let the journey begin.

Upon further reflection, here are four factors that made his question so powerful: